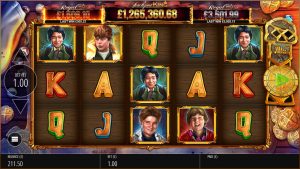 Blueprint Gaming’s latest addition to the Jackpot King family of games, The Goonies Return™, sees the iconic gang reunite once again for a new quest to scoop major jackpot prizes for players.

The latest update unites one of Blueprint’s most successful branded games with the added incentive of being able to trigger Jackpot King and win one of three progressive prizes.

The integration of Blueprint’s industry-leading progressive jackpot system adds a whole new element to this critically acclaimed title, refreshing the gameplay and offering a new experience for casino players.

Following the success of the original title first released in 2018, Blueprint partnered with Warner Bros. Consumer Products to create a much-anticipated sequel. The revitalised gameplay saw an array of new bonus features and modifiers included to further enhance the adventure.

This included the new One-Eyed Willy Exchange, which activates after any win of 15xbet or higher and provides players with the option to collect the win or spin the wheel to claim entry to one of the bonus rounds or a mystery prize.

Jo Purvis, Director of Key Accounts and Marketing UK at Blueprint Gaming, said: “By popular demand, we have combined an absolute favourite amongst players, The Goonies Return™, with the legendary Jackpot King progressive module, resulting in an epic new adventure.

“The sequel to our classic game featuring the iconic gang proved just as popular as the original. Adding Jackpot King functionality is set to drive even further engagement, as well as open the gameplay to a new audience of jackpot players.”

This website uses cookies to improve your experience while you navigate through the website. Out of these, the cookies that are categorized as necessary are stored on your browser as they are essential for the working of basic functionalities of the website. We also use third-party cookies that help us analyze and understand how you use this website. These cookies will be stored in your browser only with your consent. You also have the option to opt-out of these cookies. But opting out of some of these cookies may affect your browsing experience.
Necessary Always Enabled
Necessary cookies are absolutely essential for the website to function properly. This category only includes cookies that ensures basic functionalities and security features of the website. These cookies do not store any personal information.
Non-necessary
Any cookies that may not be particularly necessary for the website to function and is used specifically to collect user personal data via analytics, ads, other embedded contents are termed as non-necessary cookies. It is mandatory to procure user consent prior to running these cookies on your website.
SAVE & ACCEPT